ZømbïelåÑD;SÄGa is part of the Science Adventure universe.

Remember, a good conspiracy theorist must ignore all evidence that speaks against his theory.
chuunibyou on
MUSIC, COME ON
We have compiled some evidence in favour of ZømbïelåÑD;SÄGa being a SciADV title.

Let’s get the most obvious hint out of the way:
Koutarou and Rintarou have been voiced by the same person.
Both have relations to zombies.
But the series is not just linked to Steins;Gate!
In the English dub, Sakura (ZL;S) and Nae (S;G & R;N) share the same voice actress, while Tatsumi’s English voice comes from ChäoS;Child’s Takuru.
In these Screenshots we see a flyer, in Episode 1, promoting R.I.P. NIGHT FES. 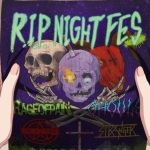 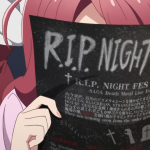 R.I.P. NIGHT FES being a death metal festival taking place in Saga. The themes of death metal and the occultic;symbolism used in the flyer align quite well with the FES (ChäoS;HEAd) we know of, even though she is not explicitly metal. Quite a large amount of goths also listen to metal.
Also, Death Musume’s name was subject to change.

Now I am going to mention the forbidden material.

Let’s have a look at Studio MAPPA, the Studio behind ZømbïelåÑD;SÄGa.
MAPPA is an acronym for Maruyama Animation Produce Project Association. It has been established by Masao Maruyama, who was a founder of… MADHOUSE.
Yes.
Yes, he worked on the cursed ChäoS;HEAd anime adaption while working for MADHOUSE.
And Takumi’s voice actor is the same as Policeman A.

You are safe now.

The prefecture Saga and Tanegashima (R;N) are both located in the Kyūshū region.

Let’s connect as many dots as possible.

Once upon a time, the Saga government saw, that they needed to rescue Saga. Its downfall was imminent.
However, there happened to be a powerful member of the Committee of Antimatter in said government.
He knew certain characters that could have the potential to reinvigorate Saga.
Thus, R.I.P. NIGHT FES was born, since it is proven, that even the remotest of areas can become popular through metal festivals. (Look up Wacken!)
But one musical event can’t be enough. It is likely, that FES may have been involved in Saga Rock as well.
The second player, that the member of the Committee of Antimatter has trusted with the task of reinvigorating Saga is Okabe Rintarou, also known as Tatsumi Kotarou.
An Okabe, who failed to save the love of his life. A depressed Okabe, who gave in to real madness. The same Okabe, who got in contact with someone from @channel, living in Nagasaki, who claimed to have mastered the science of zombiefication, out of a joke that he may be able to create ZA ZOMBIE.
Okabe decided to pay him a visit during his vacation. And that mysterious @channeler delivered usable results.
Why Nagasaki?
The Americans have left more than an atom bomb there. A failed biological attack eventually became the basis of the zombie theory.
With the money given by Saga’s government, Okabe was able to start his project.
Operation ZømbïelåÑD;SÄGa was born, to first revive Saga, and then the love of his life, ZA ZOMBIE, Makise Kurisu.
Rumours tell us, that the lab may have relocated to Nagasaki, Saga or nearby prefectures, which makes a trip to Tanegashima easier.

Which hints have I missed?

TLDR: Okabe is Tatsumi in a different worldline. FES organizes the RIP NIGHT FES in an effort to save Saga. ZømbïelåÑD;SÄGa is part of the Science Adventure universe

This site uses Akismet to reduce spam. Learn how your comment data is processed.

This website uses cookies to improve your experience while you navigate through the website. Out of these, the cookies that are categorized as necessary are stored on your browser as they are essential for the working of basic functionalities of the website. We also use third-party cookies that help us analyze and understand how you use this website. These cookies will be stored in your browser only with your consent. You also have the option to opt-out of these cookies. But opting out of some of these cookies may affect your browsing experience.
Necessary Always Enabled
Necessary cookies are absolutely essential for the website to function properly. This category only includes cookies that ensures basic functionalities and security features of the website. These cookies do not store any personal information.
Non-necessary
Any cookies that may not be particularly necessary for the website to function and is used specifically to collect user personal data via analytics, ads, other embedded contents are termed as non-necessary cookies. It is mandatory to procure user consent prior to running these cookies on your website.
SAVE & ACCEPT
To change your privacy setting, e.g. granting or withdrawing consent, click here: Settings